The sculpture embodies Bourgeois’ dilemma as an artist. While paying homage to her main source of inspiration – her childhood – she also proclaims her need to protect her memories from prying eyes. Once, when Alan Yentob probed her with questions for a TV program, she not only stood dumb, but she held up a sign that read “No Trespassing.”

Speaking of voyeurism, Cell IX constitutes a brilliant introduction to an exhibition whose theme is the artist’s studio, since our desire to take a look behind the scenes is largely motivated by the hope of accessing the artist’s psyche and find out what motivates him.

William Kentridge brings up this desire in an absurd video where he interviews himself (shown below). In response to silly questions about his artistic goals and ambitions, he smothers a sheet of paper in ink and attacks it with a drill as the interviewer declares “He doesn’t say anything interesting!”

The idea of ​​the studio and what it represents is explored in every way in the gallery on the ground floor. Hans Namuth’s famous 1951 film about Jackson Pollock painting on glass outside his studio promotes the myth of the artistic genius for whom painting is an existential performance – a direct outpouring of the psyche.

Renoir once claimed that he painted with his tail. And Paul McCarthy’s Wonderfully Crazy Movie Painter1996 (main picture) takes the piss out of these macho postures. Looking like a hobbit, with fake ears, a stuffy nose and rubber-gloved hands, he frolics around the studio assaulting giant paint tubes and canvases with a huge phallic brush before going wild like a five-year-old. around his dealer’s office, complaining about not getting paid. .

In February 1996, Tracey Emin exhibited her naked body and the creative process during a two-week residency at a gallery in Stockholm. Viewers could watch her through fish-eye lenses, either painting nudes or standing in poses of live models. Photos of her at work are exhibited in this temporary studio, where the roles of model and artist merge.

Declaring that “if I were an artist…everything I did in the studio should be art”, Bruce Nauman also performs in front of the camera. He tests his theory to its limits by endlessly repeating banal dance steps that defy classification. Andy Warhol also challenged ideas about artistic choice and integrity by letting a film camera roll around the factory for hours on end. In the featured clip, Nico and the Velvet Underground walk around getting ready to perform. 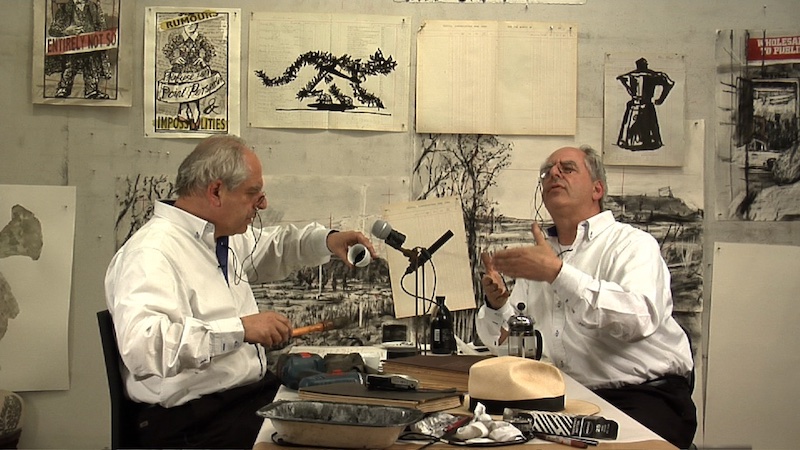 In the 1920s Kurt Schwitters began building an art installation which gradually took over his entire house in Hanover and part of his Merzbau now transforms a corner of the gallery into a labyrinthine sculpture. In 1985, Gregor Schneider began transforming his family home in Rheydt, near Mönchengladbach, into a maze of hallways leading to joyless rooms that he recorded in dystopian videos.

Women artists often had to settle for working on the kitchen table and in a defiant gesture, Martha Rosler turned her kitchen into a studio. In his movie Semiotics of the kitchen1975, she demonstrates the use of kitchen utensils, such as an ice pick, grater and knife, as weapons in a culture war demanding that women and their work be taken seriously.

In the early 1970s, Polish sculptor Alina Szapocznikow left her studio to experiment with attaching pieces of chewing gum to pieces of concrete or wood. She then photographed the results so that all sense of scale was lost and insignificant trifles appeared monumental. “Creation is situated, she says, between the dream and the daily work.

In Darren Almond’s video of his empty studio, the passage of time is marked by the loud ticking of a digital clock. The workshop is presented as a sterile place that only seems to promise hours of fruitless inactivity. But Almond also photographed the pile of rags on which the painter Lucien Freud wiped his brushes. In his elegiac painting, the rags look like burial sheets or bandages smeared with blood, and the painting is presented as an act of heroism. And in Paul Winstanley’s pristine paintings of empty art schools, the studios seem to be holding their breath as they await the arrival of students to enliven the stillness of death.

After so many thought-provoking explorations of what the workshop represents – in metaphor and in reality – the exhibition suddenly collapses into boring predictability. The chaos in which Frances Bacon worked is legendary, but a photograph of her studio augmented with a few scattered scraps of paper fails to capture the mood. Barbara Hepworth, Henry Moore, and Kim Lim receive similar treatment with tributes that do little to better understand their practice.

The only revelation comes from a photo of the Novia Scotia shack which, in the 1930s, Maud Lewis turned into a total work of art by decorating every square inch of the building and its contents with paintings of flowers and daisies. ‘birds. She also painted pictures of local scenes, which she sold to friends for $2 each. She was too poor to have a studio, so she turned everyone into painting. What a source of inspiration!