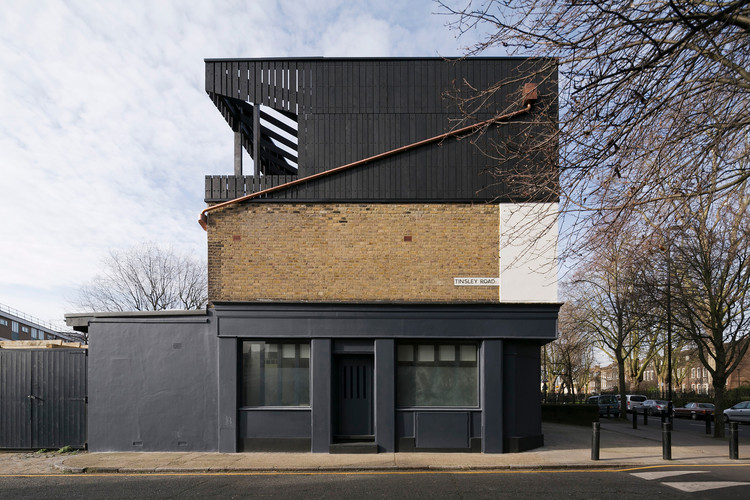 Text description provided by the architects. A former public house in a conservation area in east London, the building is believed to date from the late 1810s with later alterations and originally formed the end of a Georgian terrace. The area was badly damaged during the Second World War, including the substantial loss of the pub’s original terrace and upper floor. What remained of the adjoining houses were demolished and refurbished after the war, but the lower two floors of the pub were repaired and continued to function until the mid-1990s when it was sold and subsequently converted into living accommodation.

The artist’s owner asked us to remodel the existing building and add a new studio to the original upper floor location, to provide space for working in different media. The new studio has been formed as a single open space taking up the entire footprint of the main house, using highly insulated timber frame construction, to reduce the loads placed on the original structure and improve thermal performance.

A number of roof shape and daylighting studies were undertaken during the initial design phase. The resulting double-pitched roof is aligned east-west with a large central dormer facing north. The exterior walls rise to a parapet and the hidden geometry of the roof defines a small void in the rear elevation. Large sliding glass door leading to a small enclosed terrace with an opening in the corner, positioned to provide privacy while partially revealing the subtracted space. New casement windows on the main elevation, aligned with the first floor windows, provide views towards the adjacent trees. Inside, the wooden roof structure of the new studio is exposed, with a single steel beam supporting the roof valley. A chain hoist hangs from the beam to lift materials through new hatches from the ground.

The floor of the studio is formed from rested wooden roofing boards that were found under layers of previous roof finishes as work progressed. A new mill-finish sheet steel staircase leads up to the studio from the remodeled circulation space on the first floor. The existing rear ground floor wing has also been extended to create a new guest bedroom, living room and bathroom within a walled courtyard; and the entrance hall has been remodeled, restoring a hallway around the original staircase. The ground floor extension is built in reclaimed stock brick to match an earlier addition, and the rear wing assembly has been upgraded to improve thermal performance. The existing glazed wooden doors were repaired and reused in a new location, and the slate slabs that had previously been in the courtyard were reused as flooring. A built-in birch plywood storage wall provides storage space, a study area, and a hidden fold-down bed.

The new roof, beyond an existing small terrace on the first floor, has been planted with a mix of wildflower species found in the local urban setting. Newer casement windows on the first floor were replaced with new double-glazed painted wooden sash windows, and a later front door was also replaced using the two known historic photos of the building as reference. The colors of the exterior joinery were chosen to give a dark appearance closer to the late Georgian/Victorian color scheme which appeared to have survived well into the 20th century.

The outer lining of the new studio is formed from UK grown, thermally modified ash panels with a charred and oiled finish. The charring alludes to past events during the life of the building and has a substantial appearance that complements the brick and plastered masonry of the lower floors. One of the most dominant features of the original side elevation was the rainwater pipe that once ran diagonally from a hopper at parapet level. A new copper rainwater pipe and hoppers trace the original alignment and adorn the reformed building.