in the yard of an original sixties bungalow in Brugge, Belgium, studio mxmxm designed a prefabricated workshop/workshop for glass artist pia burrick. immersed in the surrounding trees and greenery, the Building of 45 m² is built in a stained black in wood frame and topped with a roof of four CLT panels that slope towards the center like a butterfly’. a bay window runs along the entire facade, sometimes high up to capture indirect northern light, sometimes halfway up to create privacy, and sometimes down low to create a close visual connection with the natural surroundings. four skylights additionally bathe the interior in abundant natural light.

the wooden structure and roof are completely prefabricated and assembled on site. after pouring the concrete foundation plate, only two days were necessary to assemble these prefabricated wooden elements, which considerably shortens construction time.

the pia burrick workshop is inspired by the existing bungalow

in 1956, the parents of the current residents built a modern single storey house on this wooded plot of bruges. designed by architects jaqcues petre & jan tanghethe plan of the building is designed on a grid of 1.12 by 1.12 meters consisting of an outer envelope of black tarmac wooden walls interspersed with large windows and a cantilever roof supported by ten steel columns. in 2020, current residents requested studio mxmxm to design a new studio space on this land to host the practice of glass artist pia burrick. in harmony with the existing house, a new independent building was erected on the same grid of 1.12 by 1.12 meters.

“the existing house has achieved maximum freedom and efficiency thanks to a structural logic of ten steel columns and fixed dimensions”, explain it young belgian workshop. “the same building methods were continued in the construction of the new studio space with the latest wood techniques available. 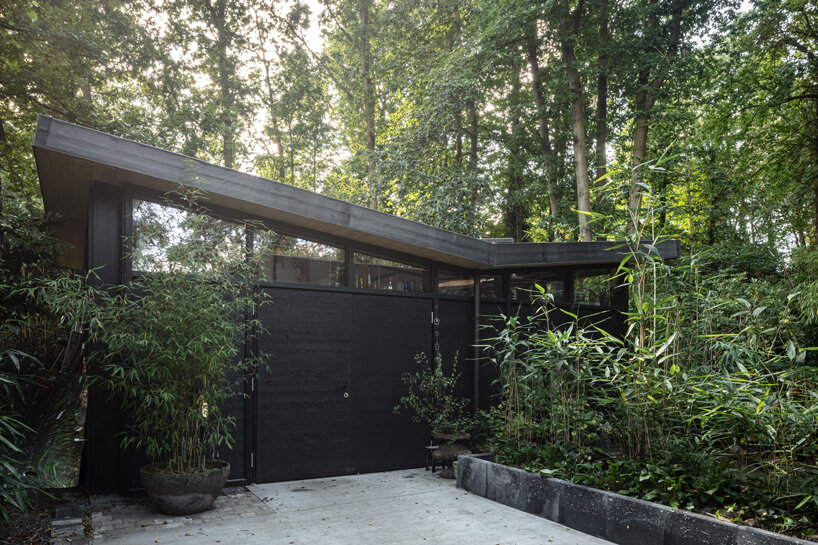 built in a black-stained wooden frame, the four prefabricated facades of the artist’s studio also form the load-bearing structure of the roof. its four CLT panels cover the entire space and are punctuated by four skylights that provide abundant natural light, as well as the continuous glass window of the facade. inside, only the structural lines are tinted black, while the intermediate fillings are in bare wood or glass, creating a graphic pattern reminiscent of the graphics of stained glass windows. “this project has been rationally designed based on structural freedom and profitability without losing its playful character”, adds studio mxmxm. 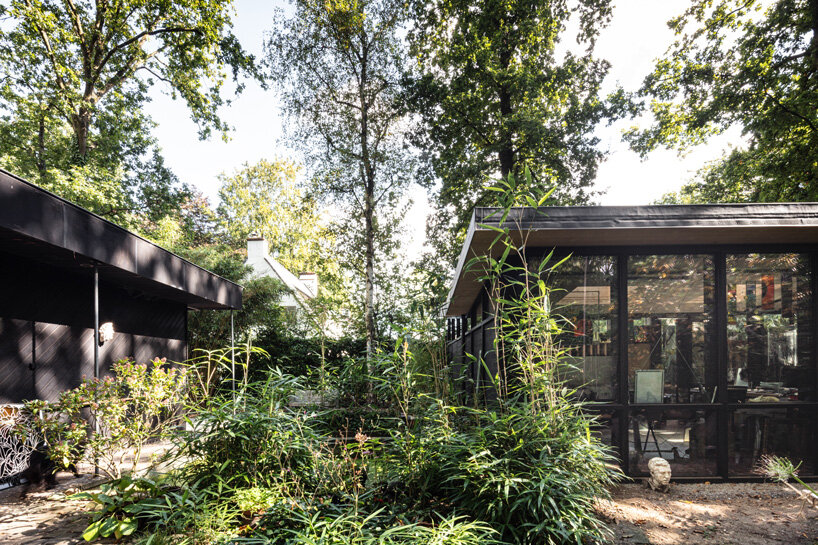