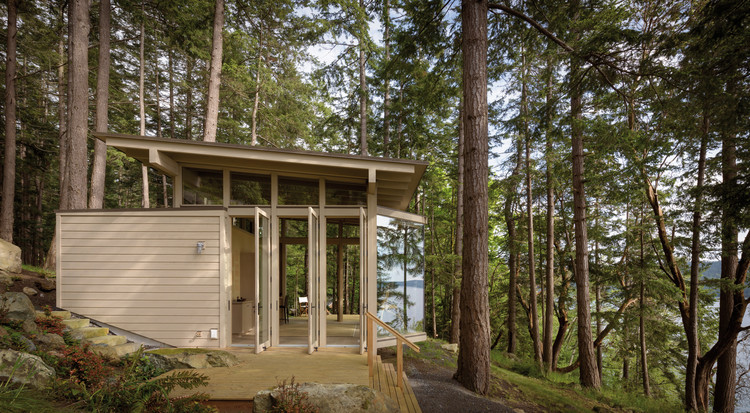 Text description provided by the architects. An intimate study in scale, this compact 450 square foot cabin makes the most of its secluded site on a wooded bluff overlooking the water in the San Juan Islands. Consisting essentially of a single room, the wood-frame cabin offers a flexible space in a paint shop or a guest house. The rear of the structure nestles gently into the hillside bounded by existing trees and rocks, enclosing a micro-kitchen and bathroom.

The front cantilevered over the slope, its open studio space circumscribed on three sides by floor-to-ceiling glass walls. The forward wall breaks up the saloon with a ‘magic’ window that slants to a point, opening the cabin to sweeping views of the water and islands beyond, while creating an inspiring spot to set up an easel. Although interior space is minimal, the design merges the cabin into its wooded site with doors opening onto decks extending to either side, making modest quarters feel larger. Clerestory windows enhance the high ceiling and make the sloping roof appear to float.

These windows also allow extra light to flood the cabin, further adding to a feeling of openness. An interior low wall delimits the studio space from the kitchen and the bathroom, while providing storage space and shelves. Ultimately, when standing in this cabin, awareness falls not on the interior spaces, but rather on the surrounding trees and the vast seascape below.